Posted by Unknown at 4:05 PM No comments:

Sell your car and take transit. Individuals who switch from driving to taking public transit can save, on average almost $9,986 this year, and up to $828 a month. American Public Transit Association
Posted by Unknown at 10:43 AM 1 comment:

Millennials in Continue Trend Away from Car Use

Millennials are less car-focused than older Americans and previous generations of young people, and their transportation behaviors continue to change in ways that reduce driving.

Between 2001 and 2009, the average number of miles driven by 16 to 34 year-olds dropped by 23 percent, as a result of young people taking fewer trips, shorter trips, and a larger share of trips by modes other than driving. Young Americans drive less than older Americans and use public transportation more, and often use multiple modes of travel during a typical day or week.

In recent years, young people appear to have continued to shift away from driving:

Census data show that the share of 16 to 24 year-olds traveling to work by car declined by 1.5 percentage points between 2006 and 2013, while the share of young people getting to work by public transportation, on foot or by bicycle, or else working from home, had increased.

Young people aged 20 to 30 are less likely to move from central cities to suburbs than a decade ago.

Driver’s licensing among young people has continued to decline. The percentage of high school seniors with driver’s licenses declined from 85 percent to 73 percent between 1996 and 2010, according to the AAA Foundation for Highway Safety, with federal data suggesting that the decline has continued since 2010.

Young people are not the only Americans who are driving less. The number of miles driven by the average American has declined nearly continuously since 2004. Americans now drive no more in total than we did in 2005 and no more on average than we did at the beginning of President Bill Clinton’s second term in office.

Posted by Unknown at 9:31 AM No comments:

Amtrak is excited to announce the selection of 24 members of the literary community as the first group of writers to participate in the #AmtrakResidency program. Over the next year, they will work on writing projects of their choice in the unique workspace of a long-distance train. The 24 residents offer a diverse representation of the writing community and hail from across the country. What will $1 million buy in New York City? A diamond-encrusted Cartier men’s watch. A small fleet of 2014 Bentley Continentals. Or maybe your very own parking spot in SoHo.

Portland's New Bridge will be Carfree

A major transit bridge project that welcomes pretty much everything but cars might seem unfathomable in other American cities of similar size and geography. However, it’s anything but atypical in Portland, a city which historically hasn't snubbed the automobile per se but has long prided itself on offering its residents alternative ways to get around town.

How Selling My Car, Saved My Life 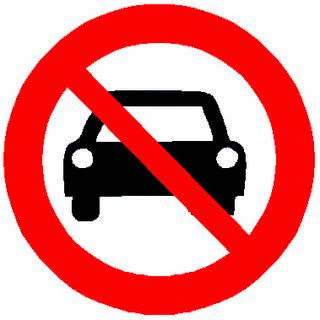 When you grow up in California, having the right car to drive is very big deal. I mowed lawns and slung pizzas to pay for the privilege of driving. On my 16th birthday, I made that mythic teen-age journey to the DMV for a driver’s license. I was cool, in a 1965, baby blue, Mustang.

Posted by Unknown at 3:38 PM No comments: